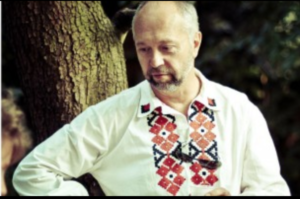 In 2019 the Society held an Annual General Meeting, celebrated our traditional annual events such as Mother Language Day, Kupallie, Kaliady and Batliejka. The Society also took part in the Fourth Annual London Conference on Belarusian Studies, commemorated 10th anniversary of the death of Vera Rich and participated in a charity event to raise funds for Belarusian children in need of medical help.

The Annual General Meeting took place on 16th March 2019 to commemorate 65th anniversary of the Society which was founded exactly on the same day in 1954. Memories of the Society’s activities and achievements were shared by Jim Dingley who served as a chairman of the Society for many previous years, Arnold McMillin, Alan Flowers and others. We reported our events of 2018, elected the Society’s officials and looked forward to the events being prepared for 2020. The Meeting was followed by a concert given by our guest, the well known Belarusian poet and musician Zmicer Vajcjushkevich.

The Forth Annual London Conference on Belarusian Studies was held on 23 March 2019 and was organised by University College London (SEES), the Ostrogorski Centre and the Belarusian Francis Skaryna Library and Museum. Speakers came from Belarus, the UK, Sweden, Germany, Finland, Canada and other countries.

The annual Mother Language Day celebration was held on 23 February 2019 with the participation of the Francis Skaryna Belarusian Library and Museum.

This was followed by a presentation of the English edition of Uladzimir Arlou’s richly illustrated book “The Grand Duchy of Lithuania” translated into English by Jim Dingley.

The book presentation and sale were a success, the poetry read was in Belarusian, English, Slovak, Malay, Hebrew and Finnish (missed out on Scots and Romany this year).

The Kupallie (midsummer) celebration was held on 22 June 2019 in the garden of 52 Penn Road and as usual included floral crowns and other decorations, Belarusian traditional dress, games and songs together with festive food and drinks. Zmicer Vajcjushkevich visited us again and performed at the event. Kupalle was well attended and enjoyed with many new faces and a significant number of children.

Commemoration of 10th anniversary of Vera Rich’s death took place in the Marian House on 20th December 2019 and was organised by our Alan Flowers. The event was attended by ABS members, Vera’s relatives and friends, including representatives of the Ukrainian community in the UK. The participants read Vera’s poetry, shared memories and anecdotes.

The end of year Christmas festivities (Kaliady) were marked at Marian House on 21 December 2019 (VE – is this the right date?) by a traditional Belarusian puppet show (Batliejka) organised and performed by Paval Saucou and his son Cyril and well attended by families and friends. The Programme of events for 2020 was set up by the ABS Council.

This entry was posted in ABS. Bookmark the permalink.